This route is part of the route that leads to Mount Polonyna Runa, and is attractive enough for a short walk. Almost the entire route runs through the forest. Several sections have rapid slopes. 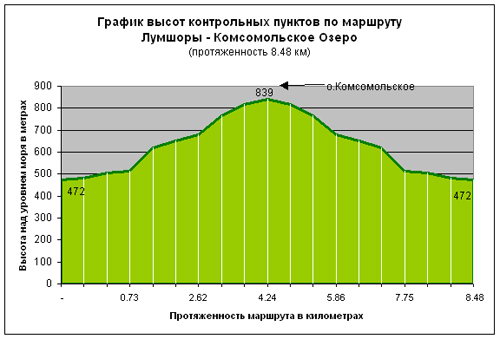 This route starts from the tourist centre “Polonyna”, located at the end of the village Lumshory, Perechyn district. You can get to the camp site by the bus Perechyn-Lumshory. From the village you need to go less than a kilometer along the road leading to the tourist centre, in the direction of the North-East. 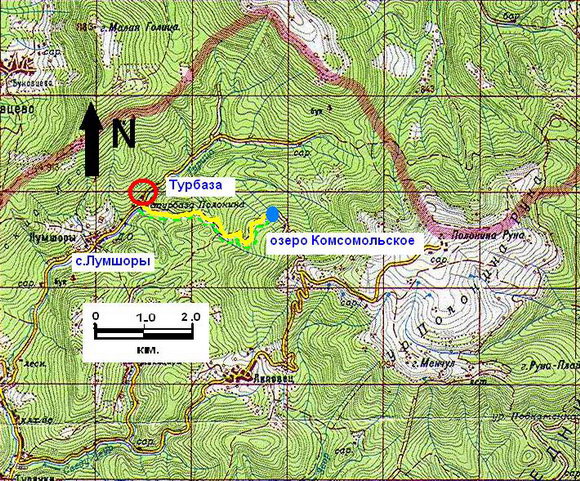 The tourist centre can be reached in the following way. Drive from Uzhgorod to the bypass road of M 06 and E 50, turn to the road T March 14 03, which leads to the settlement of Perechyn. In Perechin take the road T July 12 in the direction of the settlement of Polyana. At the 8-th kilometre, in the village of Turia-Remeta, turn aside the villages of Turichky, Lumshory, road T 07 23. Then 7- th kilometres from the turn, go left to the village of Lumshory. From the side of Lviv, Mukachevo you need to drive to the settlement of Polyana that is close to the town of Svalyava, and in the center of the village turn as the pointer shows- Perechyn. There is enough space to park the car without any problems at the tourist centre.

The trail to the lake begins immediately behind the camp. We pass on the left bank of the creek by a suspended bridge, go around the wooden building and move in a southern direction (189 °). Right from here begins the ascent. After 0.5 km. we cross a small area with abandoned foundations and turn left at the rate of 88 °. After passing 150 meters we come to a forest road and continue moving to the South. 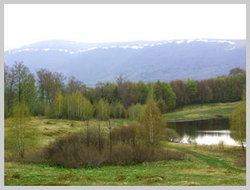 Making a small zigzag, we move in a western direction (a little over 700 meters). Further the road turns up to the South, crossing a small wooden bridge and changes the direction to the south-east (134 °). After passing 300 metres from the bridge, we come to the first meadow (650 metres above sea level). The next 370 metres we are passing at the rate of 65 °, towards the east, then 490 metres at the rate of 161 °, then 650 m towards the north (29 °). Soon the forest road goes out to a large clearing in the lower part of which is a small lake (839 metres above the sea level). Not so many years ago, the lake was named Lake Komsmolske. At this point, many tourists have a break, stopping for the night, organize summer camps. In the southern part of the field, a few facilities for tourists were built: a wooden house, flooring for tents, tables. It is a very beautiful place. In the summer the meadow is covered with lush grasses, wildflowers. In the district you can gather berries and mushrooms. Mountain air and the silence of the forest create a unique environment for rest. We return to the camp by the same trails and roads that led us to the lake.