This route leads to the ridge Stinka and the place where in 1866 the fall of one of the largest meteorites in Europe was recorded. The terrain which is to be walked has not not difficult sections and passes through scenic forests and meadows.

Our route starts from a small grocery store on the western side of the village of Kniahynia. Right by the store is a small street that turns into a dirt road and goes up strictly to the North. Climb the timber, turn right and go down the road, first in the East, then North. From there ridge Yavirnyk is perfectly visible, at the rate of 159 °. After a kilometre and a half we come to the frontier “Kniahynia”. Here you can get a pass on the basis of a permit issued in Chop and continue the journey. From outposts we continue moving in the direction of the tract “Chorni Mlaky”. Marks made in the form of two white and one blue stripe can be seen in the trees by the road. Suddenly, a path leads us to the picturesque meadow covered with tall grass overgrown with shrubs and young trees. In the tract the origanum, prosinets, nechuyveter grow etc. Once a huge “Space wanderer” landed here. Fragments of the meteorite were found throughout the village of Knyaginya. The largest part of the meteorite (about 286 kg.) was found on this site -the tract of “Chorni Mlaky”. 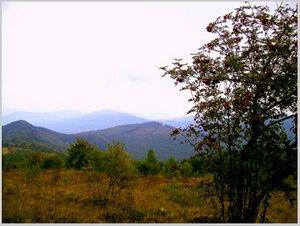 There were found about a hundred fragments weighing more than half a ton. Some parts of the meteorite are stored in the museums in Europe.
From here the trail goes into the woods, crosses the meadow , “dives” again into the woods and leads to the bare slopes of the range Stinka, where you can enjoy wonderful views of mountain stages. Next we are heading towards the south-west, cross the tract Pansky Lis climb along the track to a small top and turn right to the South, in the direction of the forest. In the forest, by the tagged the tree, the trail descends towards the south-west, then crosses the meadow, comes into the forest again, and descends to a noisy creek.
Moving on along the creek, we come to the forest road which leads us to the village of Domashyn. Right at the edge of the village we take a narrow road rising up the hill past the householders’ gardens (North-west direction). After 400 meters we come to a dividing ridge, on top of which the forest road passes, turn right towards the north, then west and go down to the village of Kniahynia. Going down the streets of the mountain village we return to the starting point of the trip.