PERECHYN, THE TOWN AT THE “CROSSROADS”

I’m starting my blog today. With a bit of thought I decided to start it with my home town Perechyn.  Just think about it…so many people are trying to run away from their home countries, so many seek to see something different, something that seems more interesting. For instance, so many Ukrainians are dreaming about going to France or the United States. And I do not disapprove of those people, it’s absolutely normal desire but it seems strange to me that people want to go to places but they haven’t seen at least half of their own country! 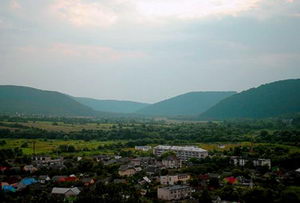 In Transcarpathia there are not so many cities and Perechyn is not the smallest one. Although when you ask someone from Uzhgorod what he or she knows about Perechyn (about the town that is located 20 km from where he lives) one just doesn’t know what to answer! So I though it would be a good idea to write something about my small town.

Well Perechyn means “crossroads” in Ukrainian.  Perechyn is indeed the crossroads in many ways.  Nestled between the Carpathian Mountains, this town of around 7000 people swells to larger numbers on the weekends when locals from neighboring villages come to shop in this regional center and during the summer, as tourists traverse the winding mountain road on their way north to Lviv from Uzhgorod.

People who live in Perechyn speak many languages. Many people of different nationalities and cultures, including Ukrainians, Russians, Belarusians, Slovakians, Hungarians, Poles, and Roma live in Perechyn. The Perechyn region has its own dialect.

Perechyn resembles a little European town. Just past the Palace of Culture, which has an unmistakable, castle-like architecture, there is central square.  The statue in the centre commemorates Fedor Feketa, a regional hero, who walked 30 kilometers every day carrying  mail on foot throughout the small villages in the Perechyn region from Uzhgorod. This is the only statue in Europe dedicated to a postman. 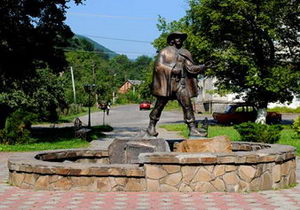 There is also a religious trail “Cresna Doroha (Cross Road)”  from where you can enjoy a lovely view of distant villages and the town of Perechyn.  Near the top of Cresna Doroha is another road leading into the forest, a great place to hunt mushrooms and wild berries or enjoy a cool walk in the forest followed by a picnic.

Another favorite summertime pastime is swimming, camping, cooking out, and playing volleyball (on a new sand court recently built by a group of active youth) on the Uzh River.

There are three hotels and many little restaurants and cafes in Perechyn which make this small town attractive for tourists. Many stars that give concerts in Uzhgorod stop in one of the best hotels in Perechyn called “Turyanska Dolyna”.

By Spring 2012, a tourist information center is supposed to open about near central square and by Fall 2012 a museum dedicated to the history of this region of Transkarpathia is to be opened. That will make it easier for tourists to find information about the Transcarpathia written in four languages.

Perechyn is small town, but the most important thing is that it’s developing and I believe that some day it will be one of the most interesting places in Europe!

So think about it, and before you visit Paris or some other place stop in Perechyn).

“Behold a new republic, in which civil and religious differences stimulate earnest endeavor and restrains every handed uplifted for a neighbor’s injury.” – William Jennings Bryant.