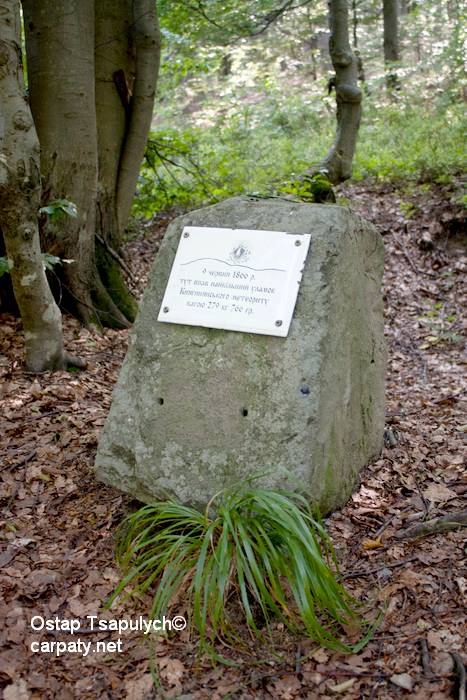 On June 9, 1866 an extraordinary event took place near the village of Knyahynya – a large meteorite has fallen from the skies. The event unfolded between Stinka and Yavirnyk Ridges. Meteorite’s fiery ball appeared over the city Liptovsky Mikulas (Slovakia), flew in an easterly direction, and having broken the distance of over 200 km exploded near the village of Knyahynya at an altitude of 40 km.

A large area was subjected to a real “stone rain”. Stones were mainly found on the fields, roads, streets of villages Knyahynya, Zboy, Stuzhytsya. But mostly the fragments fell in the forest and were never found. There were very many pieces of meteorite scattered around. During the first few days, local residents collected over 60 fragments, whereas a total of up to 1200 fragments actually fell to the ground.

The largest piece of meteorite was found on a Stinka mountain slope in Chorni Mlaky Tract by a local man named Vasyl Kryvyanyk (according to witnesses of those events). A few days after the meteorite’s fall, he went to his hayfield and saw an unusual cavity. He dug up the soil (over 2 meters deep) and found a large fragment of a meteorite weighing 279 kg and 766 g.

A memorial sign was installed at the site were the largest meteorite fragment has fallen. An eco-trail to this site was also developed.