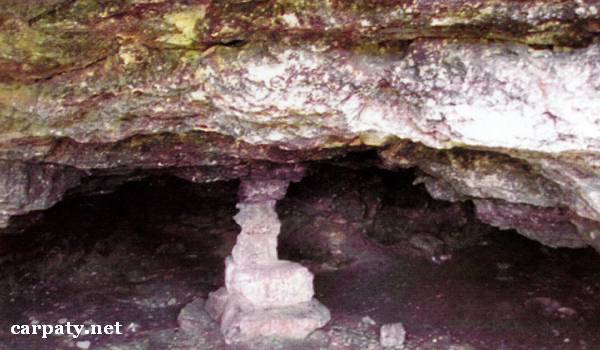 The cave was formed inside the layer of Upper Badenian regio-stage chemogenic limestones (Middle Miocene, Ratynskiy Horizon, 14 Ma). Limestones 2.2 m thick are yellowish-grey, dense, pelitemorphic, sometimes cavernous. They are underlain by glauconite-quartz sands and sandstones with lens-like beds of algae limestones, and overlain by clays, marls, and sandstones with bentonite interbeds.

Total thickness of the cave’s galleries is about 110 m. At the entrance there is large grotto with a column at the centre from which there is narrow gallery connecting two other grottoes.

The cave is known since XIII century. Its name is likely come from honey-yellow colour of calcite which formerly had decorated its walls and root as leakage forms. At present this is impressive landscape decoration.

Ecological conditions are not suitable.

Access by the same-named street then by walk-pass to the slope of Majorivka gully.

Legally the object is defined as local-rank landmark since 1970.